Creator: Clare Lancaster, Women in Business
Purpose: Inspiration and tips for women who are writing their own success stories.

Thanks to Ainslie Hunter for suggesting this manifesto!

Creator: Published in the Bible and said to be spoken by God to the people of Israel.
Purpose: A moral foundation and guide for living in Judaism and Christianity.

The Roman Catholic, Lutheran, Jewish (Talmudic), Anglican and Orthodox Christians have slightly different versions of the Ten Commandments. This a combination of these versions.

Creator: Karl Marx and Friedrich Engels, 1848
Purpose: Promotes communism by highlighting the class struggle and the problems inherent in capitalism.

For the working class (proletariat) to start a revolution and overthrow the ruling class (bourgeoisie) with the aim to create a classless society.

“It is high time that Communists should openly, in the face of the whole world, publish their views, their aims, their tendencies, and meet this nursery tale of the spectre of communism with a manifesto of the party itself.”

The history of all hitherto existing society is the history of class struggles.
Freeman and slave, patrician and plebeian, lord and serf, guild-master and journeyman, in a word, oppressor and oppressed, stood in constant opposition to one another, carried on an uninterrupted, now hidden, now open fight, a fight that each time ended, either in a revolutionary reconstitution of society at large, or in the common ruin of the contending classes.

“In short, the Communists everywhere support every revolutionary movement against the existing social and political order of things.
The Communists disdain to conceal their views and aims. They openly declare that their ends can be attained only by the forcible overthrow of all existing social conditions. Let the ruling classes tremble at a Communist revolution. The proletarians have nothing to lose but their chains. They have a world to win. Workers of the world, unite!”

Creator: The work of many people over many centuries.
Purpose: A manifesto that explains the way the world was created and the role of man and woman in that world. It becomes a framework for living for followers of Judaism or Christianity.

The seven steps in which God created with world…

Creator: Lululemon Athletica
Purpose: A set of phrases that guides the culture of the organisation.

•    Do one thing a day that scares you.
•    Life is full of setbacks. Success is determined by how you handle setbacks.
•    Your outlook on life is a direct reflection of how much you like yourself.
•    Stress is related to 99% of all illness.
•    Jealousy works the opposite way you want it to.
•    Friends are more important than money.
•    Living in the moment could be the meaning of life.
•    Visualize your eventual demise. It can have an amazing effect on how you live for the moment.
•    Practice yoga so you can remain active in physical sports as you age.
•    Dance, sing, floss and travel.
•    Children are the orgasm of life.
•    Sweat once a day to regenerate your skin.
•    What we do to the earth we do to ourselves.
•    The pursuit of happiness is the source of all unhappiness.

Creator: The work of many people over many centuries.
Purpose: The Bible contains a collection of stories and lessons for living for followers of Judaism or Christianity.

The Bible is a collection of sacred scripture of the various branches of Judaism and Christianity. The following are various stories or lessons that are commonly included in a range of Bible versions.

Creator: Mark Sission
Purpose: A challenge to conventional wisdom for getting fit quickly and maintaining your strength, fitness, leanness and health well into your 70’s, 80’s and beyond.

Creator: Bertand Russell and Albert Einstein, issued in London, 9 July 1955.
Purpose: End the use of nuclear weapons as our best chance of peace in the world.

In the tragic situation which confronts humanity, we feel that scientists should assemble in conference to appraise the perils that have arisen as a result of the development of weapons of mass destruction, and to discuss a resolution in the spirit of the appended draft.

We are speaking on this occasion, not as members of this or that nation, continent, or creed, but as human beings, members of the species Man, whose continued existence is in doubt. The world is full of conflicts; and, overshadowing all minor conflicts, the titanic struggle between Communism and anti-Communism.
Almost everybody who is politically conscious has strong feelings about one or more of these issues; but we want you, if you can, to set aside such feelings and consider yourselves only as members of a biological species which has had a remarkable history, and whose disappearance none of us can desire.

…We have to learn to think in a new way. We have to learn to ask ourselves, not what steps can be taken to give military victory to whatever group we prefer, for there no longer are such steps; the question we have to ask ourselves is: what steps can be taken to prevent a military contest of which the issue must be disastrous to all parties?
The general public, and even many men in positions of authority, have not realized what would be involved in a war with nuclear bombs.

…Here, then, is the problem which we present to you, stark and dreadful and inescapable: Shall we put an end to the human race; or shall mankind renounce war? People will not face this alternative because it is so difficult to abolish war.

…There lies before us, if we choose, continual progress in happiness, knowledge, and wisdom. Shall we, instead, choose death, because we cannot forget our quarrels? We appeal as human beings to human beings: Remember your humanity, and forget the rest. If you can do so, the way lies open to a new Paradise; if you cannot, there lies before you the risk of universal death.

We invite this Congress, and through it the scientists of the world and the general public, to subscribe to the following resolution:
“In view of the fact that in any future world war nuclear weapons will certainly be employed, and that such weapons threaten the continued existence of mankind, we urge the governments of the world to realize, and to acknowledge publicly, that their purpose cannot be furthered by a world war, and we urge them, consequently, to find peaceful means for the settlement of all matters of dispute between them.”

Creator: Google
Purpose: Core principles to guide our actions and keep Google looking towards the future.

To get things done! 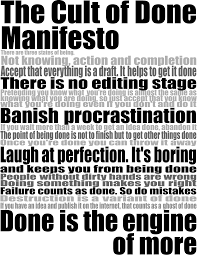 The Cult of Done

1.    There are three states of being. Not knowing, action and completion.
2.    Accept that everything is a draft. It helps to get it done.
3.    There is no editing stage.
4.    Pretending you know what you’re doing is almost the same as knowing what you are doing, so just accept that you know what you’re doing even if you don’t and do it.
5.    Banish procrastination. If you wait more than a week to get an idea done, abandon it.
6.    The point of being done is not to finish but to get other things done.
7.    Once you’re done you can throw it away.
8.    Laugh at perfection. It’s boring and keeps you from being done.
9.    People without dirty hands are wrong. Doing something makes you right.
10.    Failure counts as done. So do mistakes.
11.    Destruction is a variant of done.
12.    If you have an idea and publish it on the internet, that counts as a ghost of done.
13.    Done is the engine of more.