Michael Pollan is an American journalist and author who explores the intersection between nature and culture. He has written widely on the food we eat.

Several of his books have been turned into TV shows, including the Netflix documentary Cooked.

“Eating in our time has become complicated – needlessly so, in my opinion.

…But, for all the scientific and pseudo-scientific food baggage we’ve taken on in recent years, we still don’t know what we should be eating.

…A few years ago, feeling as confused as everyone else, I set out to get to the bottom of a simple question: what should I eat? I’m not a nutrition expert or a scientist, just a curious journalist hoping to answer a straightforward question for myself and my family.

…The selection of food rules below are less about the theory, history and science of eating than about our daily lives and practice. They are personal policies, designed to help you eat real food in moderation and, by doing so, substantially to get off the western diet. I deliberately avoid the vocabulary of nutrition or biochemistry, though in most cases there is scientific research to back them up.”

“There are basically two important things you need to know about the links between diet and health, two facts that are not in dispute. All the contending parties in the nutrition wars agree on them. And these facts are sturdy enough that we can build a sensible diet upon them.

The first is that populations that eat a so-called western diet – generally defined as a diet consisting of lots of processed foods and meat, lots of added fat and sugar, lots of refined grains, lots of everything except vegetables, fruits and wholegrains – invariably suffer from high rates of the so-called Western diseases: obesity, type 2 diabetes. Eighty per cent of the cardiovascular diseases and more than a third of all cancers can be linked to this diet.

Secondly, there is no single ideal human diet; the human omnivore is exquisitely adapted to a wide range of different foods. And there is a third, very hopeful fact that flows from these two: people who get off the western diet see dramatic improvements in their health.”

Eat only foods that will eventually rot.

Eat foods made from ingredients that you can picture in their raw state or growing in nature.

Get out of the supermarket whenever you can.

Eat only foods that have been cooked by humans. (not corporations)

Treat meat as a flavouring or special occasion food.

Eat animals that have themselves eaten well.

Sweeten and salt your food yourself.

“The whiter the bread, the sooner you’ll be dead.”

Have a glass of wine with dinner.

Do all your eating at a table.

Break the rules once in a while.

This is a beautiful example of a rules based manifesto with the two most important parts on clear display.

What I particularly like here are the word choices in the rules. They are casual and informal which make this manifesto accessible and they support the view that he is not trying to present science, theory or history – instead something practical. They are also a healthy mix of clarity and intrigue.

Some rules are very clear:

Others force you to stop, think and ask: what does he mean by that? For instance:

While the goal in this second group is to prompt engagement, the true test here is: once they are explained, do they add value? Are they easily understood and applied?

For example, ‘eat your colours’. As soon as you know that Pollan is talking about eating a wide range of fruits and vegetables that come in a wide range of colours, this becomes a clear, obvious and easy rule to use in your daily life.

Gary Nabhan – A Terrorists Manifesto for Eating in Place

Creator: Nick Southall is the creator of the Blue Gym website.

Purpose: To celebrate the natural environment as a means to improving health and wellbeing.

1) Blue Gym is a campaign with lots of different activities falling under its umbrella designed to get more people physically active using our coastal and inland waters.

2) The Peninsula Medical School is leading research activity in response to requests from regional health care professionals who are trying to find ways of combating the obesity epidemic and the increasing incidence of psychiatric disorders. It will hopefully provide new medical evidence to confirm the cost effective role the Blue Gym can play in tacking many current health & social challenges

The Blue Gym Manifesto on their community site

Creator: The Yellow Warriors Society of the Philippines (YWSP)

Purpose: To educate “on healthy lifestyle practices and stricter medical procedures to prevent contamination, provide better access to hepatitis treatment and implement and monitor labor laws for the protection of hepatitis patients and non-HBV (non-Hepatitis B virus) workers in the workplace.” 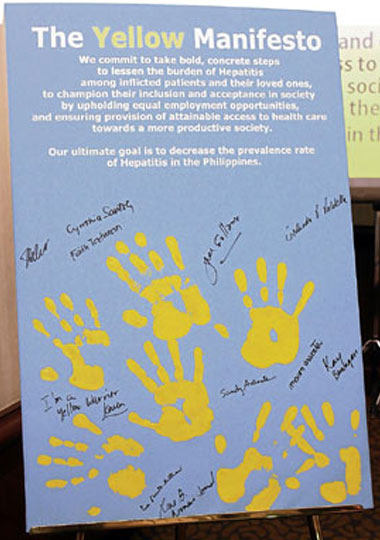 Purpose: Seven simple things that you can do to promote longevity, health and happiness. Plus live to 100 years of age and still be sexy.

The 100 and Sexy Manifesto

1.  Focus on good health! – Know what it take to make the grade and review this often.

2.  Great Relationships are the best medicine! – Do you belong in your tribe?  Have a reason to get up each day and help someone else – it’s strong medicine!

4.  Exercise can kill you! – If you don’t get your hour per day and love what you’re doing and who you’re with.

5  Water is the the fountain of life! – Most of us are dehydrated. Water can stop heart attacks, dementia and strokes!

6.  Have a medical plan of prevention! – Not an intervention plan.

7.  Personal time, quiet time! – Reflection and gratitude are the virtual elixir of longevity.

Purpose: “The Greatist Team has a simple mission: to inspire and inform people to make at least one healthier decision per week.” (Greatist Website)

Creator: Mark Sission
Purpose: A challenge to conventional wisdom for getting fit quickly and maintaining your strength, fitness, leanness and health well into your 70’s, 80’s and beyond.